The rise of conversational interfaces – Part 3

Throughout our blog series (read part one and part two) on conversational interfaces, we’ve looked at the rapid growth of instant messaging; how the interfaces work and touched on why brands are adopting them. More specifically we’ve seen why brands are using them as a way of scaling one-on-one conversations directly with their users through chatbots. Today, I want to explore how successful they have been and provide a few examples in situ.

The premature rise of the chatbots?

The idea was great in theory. Chatbots would be able to replace human interaction, replying to customer service queries in a conversation-like fashion via messaging apps, effectively cutting down on human resources and in turn, business costs.

But, when in February this year Facebook announced it was scaling back on its bots, some were left thinking that in reality, they maybe hadn’t really lived up to their hype?

So, what went wrong? Does this mean the chatbot trend is over before it really got going? What about the companies that have already invested? Surely there are some bots that are worth our time?

Where did it all go wrong?

Throughout 2016 we heard a lot about chatbots and that apps will no longer be the way we interact with digital services in the future(this will open in a new window). So much so, that brands jumped on the chatbot bandwagon in their droves – over 34,000 of them to be exact were live on Messenger by the end of last year.

But then, a couple of months ago, Facebook reported that 70% of their Messenger chatbots are failing to fulfil user requests(this will open in a new window). So, what exactly has caused this retraction? Well, during some of our research on the chatbots out there, we have to admit we did come across some of this: 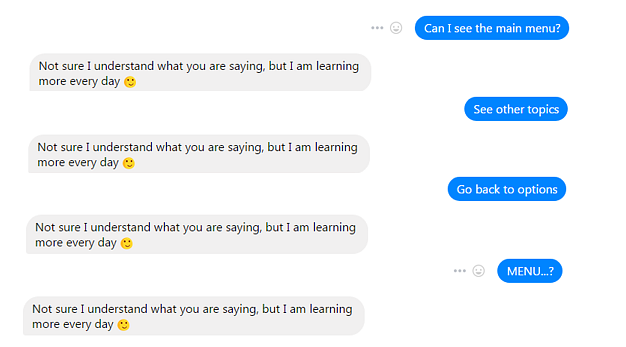 It soon became clear that a huge number of chatbots out there aren’t actually all that intelligent, and in fact are based on decision tree logic or the retrieval model (see part two of our blog series for more on this). This is where the bot depends on specific keywords identified in the user input.

So, in some cases the technology is not yet sophisticated enough to have anything resembling a genuine conversation.

How did this happen?

Chatbots ‘got really overhyped really, really quickly’ said Messenger VP David Marcus, in February this year(this will open in a new window). He went on to say that many of the first bots on the Messenger platform weren’t nearly as good as the native apps they were designed to replace. This hype may have hurt adoption and use of this new technology, with users becoming disenchanted with the bots on offer.

So, instead of continuing its large-scale development of chatbot technology, Facebook is turning its focus to getting the existing bots to answer a limited set of questions correctly. It recently announced some new bot features including a persistent menu function. As soon as the user starts engaging with a chatbot, a list of its core functions is displayed. 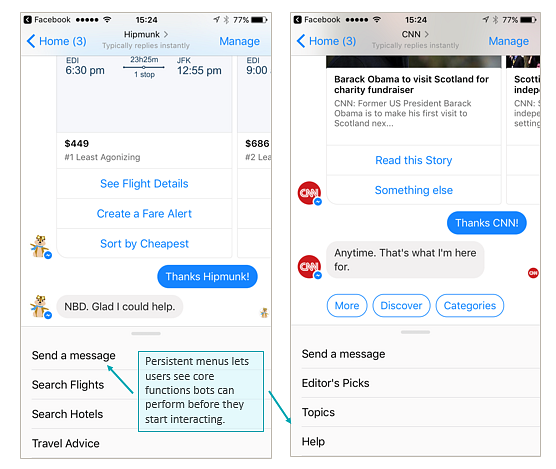 Chatbots are a fairly new concept and most users still aren’t overly familiar with how to interact with them. Prompting them to enter input in a format the bot can understand means less chance for open-ended questions using natural language that the bot can’t find a reply for.

However, this does mean for now that chatbot user experience has become less of a two-way conversation and more like browsing through an app, with users clicking buttons to get desired information. Of course, this means that users won’t be frustrated by a chatbot’s inability to respond correctly which only leads to disappointment in the technology as a whole.

The most successful bots will be the ones that provide consistent value and that users want to come back to regularly. We did come across a few of these that were definitely more impressive than others. If you’re new to chatbots, here are a few that are definitely worth trying out.

Chatbots that are worth trying out 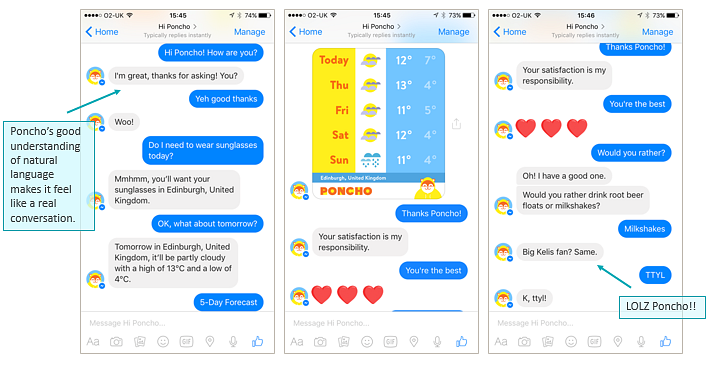 Poncho (this will open in a new window)is a self-confessed ‘weather cat and new best friend’. Adorable, right? We think so too and interacting with him doesn’t disappoint. Need the weather forecast for your holiday next week or to know if you should be wearing sunglasses today? Poncho has you covered.

When you first chat with Poncho, he’ll ask the users location and offer up daily weather alerts which can be pretty handy. He provides the weather in any location on demand – all you have to do is ask. Each time users come back, Poncho remembers their location making interaction fast and simple.

The only downside to our buddy Poncho is that commands do have to be fairly specific, there were instances when veering slightly off script, he couldn’t understand what we were saying.

The verdict? It does have to be said that Poncho’s natural language understanding is at times fairly limited – you have to be quite specific when talking to him. But with this bot, that isn’t really the point! He’s fun to interact with and other than weather, you can also play games or have some silly conversations. Overall, Poncho is your pal, your ‘weathercat’ pal who makes you laugh with his quirky replies. 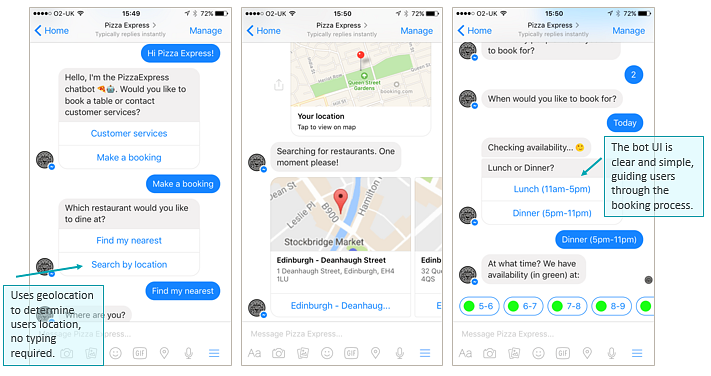 This chatbot(this will open in a new window) lets users book a table at local Pizza Express restaurants quickly and easily – in fact in under 2 minutes. It does so by using live data to analyse timings and table availability, taking into account where the user is at that time. The bot has a very specific task, which it does well. If you veer off topic however, it won’t know what to do and passes you through to a real person.

Prior to launching the bot, Pizza Express were getting lots of customers trying to book through Facebook Messenger, which made the move to automating this service a no-brainer.

The verdict? If you are wanting to book a table at Pizza Express, this is a really quick and efficient option and no need for a phone call. We will definitely be using this for our pizza cravings in the future. 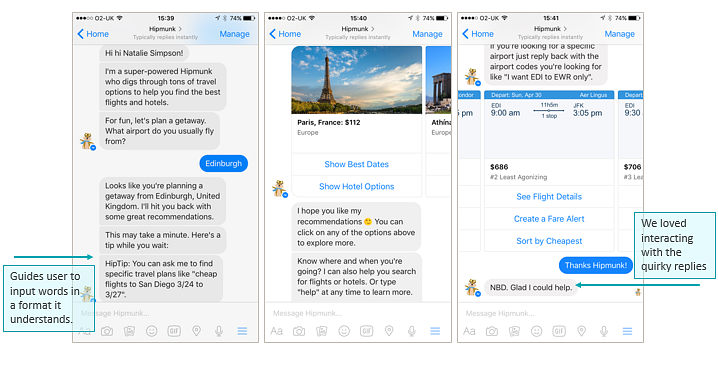 Conversation is a natural fit for users expressing their travel preferences, something Hipmunk takes advantage of well. They debuted the bot last year, carrying over their playful chipmunk logo and branding to the chatbot space where personality can go a long way in terms of user engagement and loyalty.

Hipmunk sends users travel suggestions based on departure airport which is a great feature. It also goes beyond what’s possible using an app or website by allowing users to ask open-ended questions in natural language when searching for flights, creating fare alerts or even getting travel advice. Impressive!

Conversation is free flow, the bot understands complex input and asks when it requires more information. Asking Hipmunk for ‘a flight from Edinburgh to Paris today, return tomorrow’ returns exactly what we wanted! It even understands phrases such as ‘next Friday’ – wow, this bot has some skills!

The verdict?: If you are looking for a fun and easy way to search for flights or travel inspiration, Hipmunk does the job and does it well! Its natural language capabilities are some of the best we’ve seen and ‘hiptips’ are provided throughout the conversation. These ‘hiptips’ guide users to add input in a format the bot will understand whilst still feeling like you’re having a conversation. Its quirky personality goes a long way – we will be back Hipmunk! 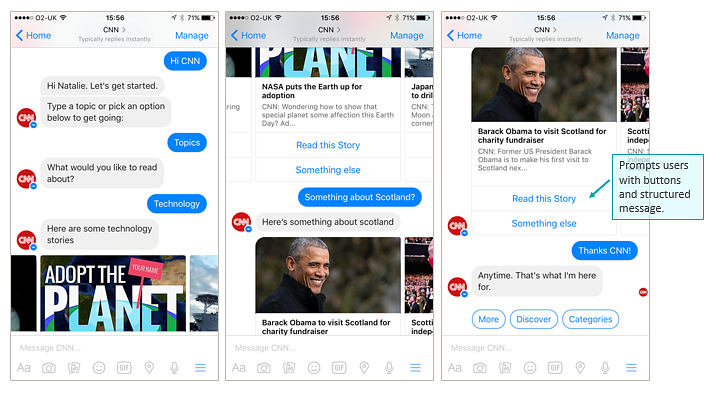 The CNN chatbot(this will open in a new window) is simple yet useful for staying up to date with the daily headlines. You can browse news stories by category, by keyword or ask it to give you the top news stories of the day.

It makes good use of prompting the user with buttons and structured messages. While this is useful to make sure the user doesn’t go off track, it makes it feel less like a conversation and far more like a command line.

The CNN bot is definitely not someone I’d go and have a drink with (like my buddy Poncho), but being a news provider – that’s ok. I’m much more inclined to treat it like a service and less like a friend. They’ve found the right tone of voice which suits the sector well.

Other than it giving me stories, it’s unclear what else I can do with this bot. Other than interacting with the buttons and structured messages, there’s not much opportunity for anything else.

The verdict?: Useful for keeping up with today’s news, but veer off topic and this bot won’t understand you. This news bot just doesn’t give me enough to break existing habits any time now. For now, I’ll probably just stick to Google.

Despite the hype, the bot revolution is still in the early stages and although it has taken a couple of knocks already, is definitely set to continue.

A recent report by BI Intelligence(this will open in a new window) revealed that over 80% of businesses want to develop a chatbot by 2020. AI and natural language processing technologies are clearly gaining momentum in other areas as well as chatbots. Amazon Echo and Siri are now dominating both our homes and our phones. It will be interesting to see how companies continue to utilise these forms of conversational interfaces and AI to speed up everyday tasks and make our lives easier.

Conversational interfaces aren’t going anywhere fast. With consumers becoming increasingly aware and familiar with interacting with them on a daily basis, we predict they are here to stay. Long live the bots!

User Vision is celebrating Global Accessibility Awareness Day on 21st May. It's an area we've been passionate about and promoting for the past 20 years! Watch our video to learn more.

Applying service design & UX in the fight against the virus

As the world fights a pandemic, any technical solutions should incorporate excellent user experience design. We are keen to contribute to the design of the best user experiences as cost effectively as possible.

Read the article: Applying service design & UX in the fight against the virus

We've got lots of tools and services to keep you in touch with your audiences and ensure your digital touchpoints are as effective as possible.